And I’ll be in Scotland a’fore ye…

But me and my true love will never meet again,

I took my husband on a trip to Scotland for his 50th birthday.  It was the first time in years we vacationed without our kids and it was quite an eye-opener for me.  Not only did my hubby of 24 years not get on my nerves (zero bickering between us), I actually enjoyed every second of his company. Lucky me!  Granted, it was an easy way to spend time with each other – doing things we both love and having our trip’s details taken care of for us –You see we went with a Rick Steves tour group.  But not ever having done a tour before, we didn’t know if we would like it. Usually, we are on our own, winging our daily itinerary and pretty much keeping to ourselves. This time, sans our boys, we decided to try something different.

Much to my surprise we liked it a lot. Of course it helped that the members of our tour group absolutely rocked.  There were no “grumps” or “whiners”. Just mostly jovial retired couples, with some younger or non-retired folks scattered in the mix.

During our first “getting to know you” orientation we walked into the meeting room of our amazingly swank Edinburgh (pronounced Edinburrah) hotel and took in the view= a group of eager, albeit slightly anxious, travelers all looking expectantly at each other trying to figure out if everyone seemed relatively normal.

It turned out that our tour guide was extremely qualified to handle this potentially uneasy situation and provided an assortment of libations of which she gave generous pours. After a brief happy hour, we became more relaxed and eventually got to self-introductions. I myself had downed more than three glasses of wine and was nervous but eager to size up which people were going to be the weirdos to avoid and which were going to have something in common with me that I might befriend.

As the introductions progressed, I learned that everyone was an experienced traveler. (Some were on their 6th Rick Steves tour) Those with grandchildren had the best grandchildren. Those who owned dogs had the best dogs. Most of the group appeared to be comfortable addressing a room full of strangers with witty bios. They all had friendly and funny introductions and made great first impressions.

When it came time for my turn to stand up and introduce myself I panicked. My husband, who introduced himself before me, used the only quasi funny line that I could think of — about us being in the right country because of his love for whiskey—you see even our dog was named Whiskey. ha ha.

So I blurted out that although a requirement for the Rick Steves tour was “No grumps!” I myself could be just the most dreadful grump at times, especially if I didn’t eat food on a regular basis. Just ask my husband.

“Good Lord, what have I done?” I thought. I portrayed myself akin to a feral animal and I had most assuredly just pegged myself as the grumpy weirdo to avoid. Even my husband looked at me with this incredulous look of “Why did you share that?”…sigh.

But because this was a group of nice souls, instead of shunning me, most people came up to me and told me they always kept snacks in their backpacks and to let them know if I ever felt low blood sugar creeping in.

“What a nice group of folks” I thought.  Even the Canadians 🙂

During the two weeks that followed we experienced a fairytale of a land. Here are my greatest impressions:

Nary a window is seen without a cheerful display of multi colored flowers hanging from a pot or window box.

The welcoming locals are quick to offer help or suggestions. I especially loved the woman who claimed any restaurant on her street was “not horrible”.

Everything from their yummy scones, jams and preserves to their incredibly fresh fish and chips are a memorable delight for one’s taste buds.

The haggis, a kind of peppery sausage-y pudding (no, not like jello pudding) from less used parts of a sheep (organs) is found everywhere. Although it was not my favorite, I did enjoy the haggis flavored potato chips –go figure! 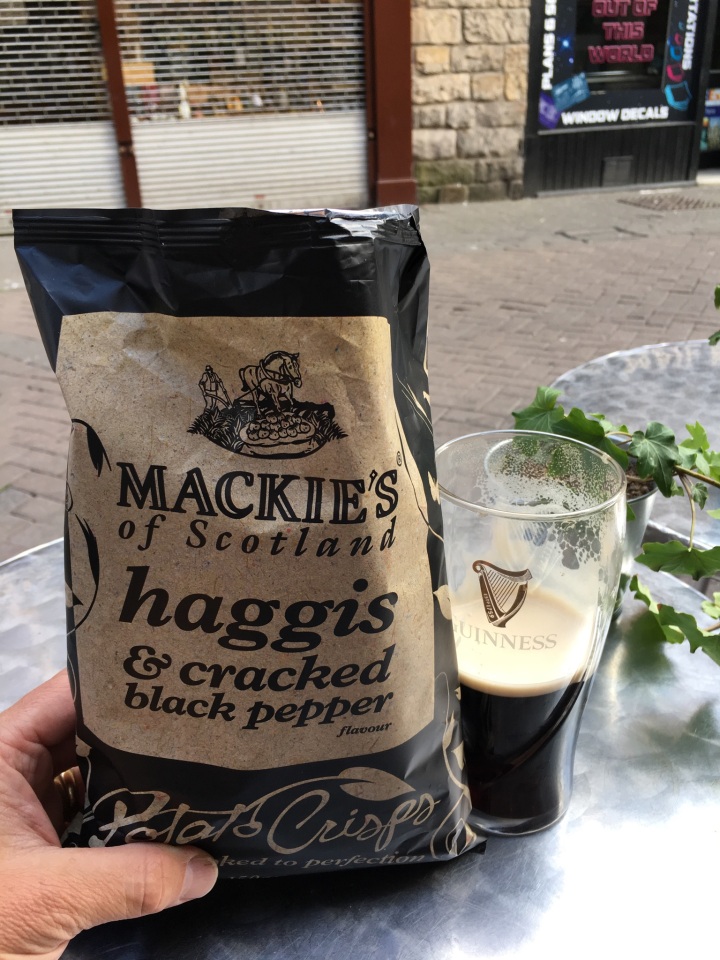 The imposing castles, still standing or mostly standing after countless sieges during a thousand-year span of history, were all magnificent in their own way with their own rich histories.  Talk about built to last.  The fact that these are still standing is a wonder.(Why does something relatively small like my water heater only last for 10 years?)

The jaw dropping landscapes, seascapes and city skylines were truly one of a kind and could only be found in Scotland. Could the valleys at Glencoe be more mesmerizing green or its mountain tops loom more proudly? Could the Scottish thistle pop with a brighter shade of purple? I think not.

With over 31,000 lochs (lakes) you never feel as though you would lack for water. They all had interesting names (Loch Awe, Loch Lomond, Loch Tay, and yes, Loch Ness) but my favorite name was obviously the one that was named last, as if all the other ones were taken = Loch Lochy.

And what about the scattered herds of wooly white sheep (with the occasional fellow black sheep) munching grass by the roadside? They were so squishy soft and cuddly looking, I wanted to take one home.

One amazing Highland stop was at a working sheep farm. The border collies that demonstrated their commanding ability to make the sheep go where they want them to go was nothing short of spectacular. I came away from Scotland wishing the world could be run by sheepdogs. They were super smart, hardworking, loyal good listeners that worked together to get things done. Brilliant!

And then there were the Highland cows; so majestic and sturdy with their wide heavy horns, double coats of wavy hair, and scraggly bangs that needed a trim. Magnificent creatures these “hairy coos”!

But of course one of the greatest things about Scotland had to be its whiskey. It is the lifeblood that courses through this country’s veins. Scotland has wondrous and infinite choices of whiskey, from light and delicate to rich and smoky. And my husband was determined to compare them all. Although, mostly a wine drinker myself, I did enjoy the warming effect of drinking a lighter whiskey. But what I really found strangely appealing was the experience of drinking whiskey out of these cool shaped delicate, smallish glasses.

The times spent in the pubs were indicative of the friendliness of the Scots. Conversations were easily started with us by the locals. When a lively band sang and played, the entire lot of patrons would sing along with swaying hands that grasped tall foamy glasses. So much fun!

And I must say that the bartenders and shop cashiers were all extremely patient with me when I attempted to count out change for my purchases. I would pick out one piece at a time from my wallet, squinting at the teeny tiny print on the coins, counting aloud, “That is 10 pence… uh this is 1 pound no, no this is a 2 pound piece, this is argh…how frustrating it must have been for them. But I never got rushed or made fun of.

For all the wonderful sights and intriguing history we learned during the tour, it would not have been the same experience without the charmed tour group we had.  There were folks from Oregon, Washington, California, British Columbia, North Carolina, South Carolina, Missouri, Nevada, Colorado and Michigan.  And kind of miraculously we all got along. Good natured teasing and vibrant discussions were a daily occurrence. It didn’t matter where you sat on the bus or at which table you dined – you were in a fun zone.

A brilliant guide and skilled bus driver led the 26 of us to amazing destinations. It was all done in such a professional, entertaining way. And even though initially I didn’t feel I would have much in common with the others, I came out of the tour knowing that we all shared similar life experiences – finding loves and losing loves, striving to be healthy and happy, raising families and finding hobbies that enrich our lives. (Not surprisingly in this Scottish tour group golf was a main hobby.)

Overall, I guess there is something to be said for finding extra happiness in a shared experience with a tour group. Although my husband and I would have surely enjoyed the gifts Scotland had to offer on our own,  the exploration of a new place was even more enjoyable because we got to share the sights and events with others. It’s like eating a big fat banana split. Although fun to share with one other person, the more spoons the merrier… And in the evenings, the camaraderie of reliving the day over a pint of beer, large glass of wine or wee dram of whiskey with new-found friends is a part of this trip in particular that will stay with me as a cherished time during our dream vacation to Scotland.

May the road rise up to meet you.

May the wind be always at your back.

May the sun shine warm upon your face.

May the rain fall soft upon your field,

and until we meet again

May God hold you in the palm of his hand.